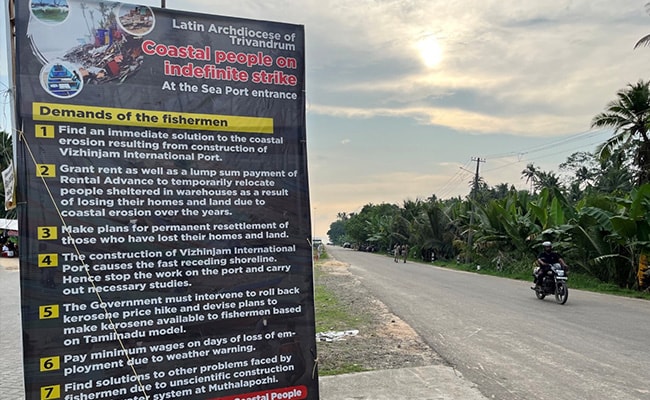 community-protests-3545347
The Adani conglomerate plans to send heavy vehicles to the port on Friday after the court this week said vehicle movement should not be blocked.  November 23, 2022 On the main road to billionaire Gautam Adani's planned Vizhinjam mega port on the southern tip of India, a shelter built by the coastal region's Christian fishing community blocks the entrance, preventing further construction.

Across the street, supporters of the port including members of Prime Minister Narendra Modi's ruling party and Hindu groups have set up their own shelters.

Each day, the protesters and port supporters blare music from loudspeakers and chant slogans. Prakash R describes the situation as a standoff between "people of the sea", who are mostly Christian and make their living from fishing and "people of the land" who are predominantly Hindu.

This article reads more of a religious war than one that has pointed merits and demerits of the Adani Mega Port. This kind of news further polarises citizens rather than bringing them together to protect the landscape  .  There must be one voice against such a project/s. Divided voice may not get desired results. Adani port has already acquired huge land in the surroundings area with the help of both the government. A state wide solidarity and non violent protest should be planned.

The church is now in the forefront of the agitation. But there are other people who have been protesting for years. Coastal erosion has increased significantly since the construction began. Apart from environmental and social issues, the CAG itself has found the project to be economically unviable.
The agreement is a complete sell off to Adani.
Of this 7000+ crore project, Adani will be investing just above 2000 crores(obviously, that will be funded by our banks for him). And Adani will have 100 percent revenue from the project for 15 years. On 16th year, the state will get 1%, on 17th, 2% and so on upto 40th year when the state will get 25%
More importantly, the port will need huge quantities of boulders that will be mined from the Western Ghats.